A Day of Farewells

I awoke stubbornly, still drunk and not ready for the day ahead of me.  It was Sunday, August 12 and I had to say goodbye to two completely different, yet amazing people by the end of the day.  My new friend Nimblewill Nomad was on the last day of his thru-hike of the Ice Age Trail and I was going to meet him to guide the way home and make sure his last day went well.  After hitting snooze a dozen times on my alarm clock, I finally arose from my slumber at my buddy Fields house in the Twin Cities.  When you wake up drunk from the night before, you are usually feeling great because the hangover hasn’t hit you yet and so was the case with me.  I packed up and said goodbye to Bryan and Melisa.  They are two of my favorite people on earth and always treat me better than I deserve.

I hit the road, heading towards St. Croix Falls and Nimblewill.  The night before, I had talked to Nimblewill and the plan was for me to meet him by the end of the Gandy Dancer segment of the IAT in Centurdia.  This plan sounded ridiculous as I trucked north, but after stashing my bike at the western terminus (and getting a McChicken and large soda from McDonald’s to counter the impending hangover) I met up with Nimblewill in Centurdia.  I was not alone hiking with him this day as Gray Ghost and newly minted thru-hiker Paul and his cousin Nate joined the fray, quite the motley crew.  I was about to text former resident Professor Englund about how crappy Centurdia still was when; of course, Pete, Trish and the rugrats pull up.  Holy Cow!  They hadn’t been back to town since they left for Iowa in the spring so the coincidence of our crossing paths was mind-blowing.  We all talked trail for a while before we parted ways.  The trail wasn’t going to finish itself!

The Gandy Dancer was finished in short order and we turned onto 160th for a couple mile road walk to the final section.  Conversation moved freely between the hikers as we talked about the weather and shared stories about our hikes.  When a quiet moment floated up, we kept walking because hikers become comfortable with silence when spending long days, weeks and months on the trail.  Our mouths may by shut, but our minds are still at work taking in the scenery and thinking about the trail that lay behind us and what may be awaiting us around the bend.

Paul had finished the trail, 3 short weeks earlier, and was eager to get back out and do some more hiking to help out a fellow thru-hiker.  Chet “Gray Ghost” had thru-hiked in 2009 and I followed in 2010 so we had group of well-versed Ice Age Trail hikers.  We made it the start of the St. Croix segment where Paul’s cousin Nate, had stashed a cooler with snacks and beverages.  Perfect!  We refueled our bodies and refilled our water bottles while talking about the trail ahead.  This was the start of the last segment of the Ice Age Trail, a measly 7.4 miles stood between Nimblewill and the completion of his thru-hike.
The trail led us through the Mindy Creek section, which is one of my favorites.  There is a deep, narrow gorge with some fantastic rockwork and views and all of this only a stone’s throw from some houses.  They probably don’t even appreciate it.  We wound through town, mixing between roads and trails passing by schools, hospitals (and a few of Chet’s friend’s houses) and woods on our way to the Western Terminus.

Finally, shortly after 5, we entered Interstate State Park.  This is where I opened a beer on my hike, but sadly, no beer was present today.  Nimblewill’s gait quickened as he sensed the end.  It was day 45 for him and was ready to be done and get home.  The rest of us followed behind, trying to keep up with the legendary hiker.  Being a state park, signage was dismal (although not as horrible as Devil’s Lake) so Nimblewill had to slow down a few times to make sure he was on the right path.  He wanted a picture of the last blaze on the Ice Age Trail and it happened to be the one I campaigned for after my hike when I was a few hundred yards from the end but had to stop at a trail junction because I had no idea where to go (at least there was one good thing that came out of my hike).

We crossed the road to join the Potholes Trail and walk the last few yards.  I wasn’t sure what to expect as I retraced the last steps of my hike.  Some of the same emotions swept over me, but this time I wasn’t alone.  I was in the company of hardened long-distance hikers who have been down the same road as me.  We turned the last corner and stopped, letting Nimblewill walk the last 20 feet by himself.  This was his hike and the penultimate step in his quest to hike all 11 National Scenic Trails.  There was no hoopla, no balloons or streamers, just an old man with his pack, gazing at the plaque affixed to a rock declaring that this is the western terminus. 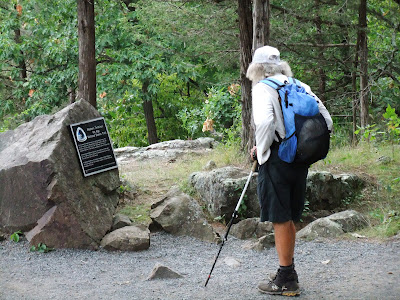 I don’t know what was going through his head, but I felt honored to be with him at the end, to watch this 73-year-old man with more trail miles behind him than most anyone else take his last step and genuflect on his journey.  It was a moment I will not soon forget. 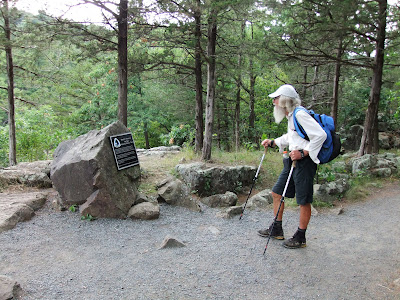 We congratulated and hugged Nimblewill and posed for the obligatory pictures.  Phone calls were made and texts were sent to let folks know Nimblewill had finished.  After a few minutes we headed around the loop trail and back to the waiting cars (It seems kinda goofy that the western terminus is in the middle of a loop trail so even after you finish, your hiking isn’t over). 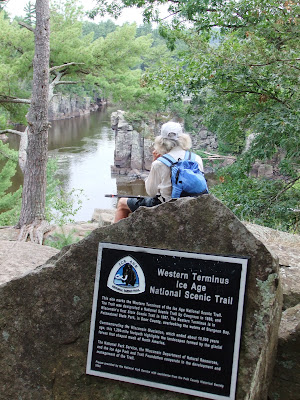 After saying goodbye to Nimblewill, my thoughts turned to the next person I’d be saying goodbye to before the day was over, Jess at the Come Back In.  It was 7:30 and I was in St. Croix.  It was going to be a push to stop in EC to snag some food from the rents and make it down to Madison before the night was over, but I had to make it.  It was Jess’s last night working at the Come Back before moving out to Portland.  She may be one of my absolute favorite bartenders, but she’s more than that.  Sure, she did a great job remembering my beer of choice and time card number, but to call her just a bartender would be doing a disservice to her.  Jess is one of the coolest girls I’ve met and a welcome sight for sore eyes after a long day (Yes, beauty is in the eye of the beer holder).  Not to mention she has the brains to boot. She is a math nerd (and I say that endearingly) and always up for a good conversation or stay after her shift to have a beer or two.  When I’d come across an interesting math article (not an oxymoron) like this recent one in the New York Times asking if Algebra is necessary, I’d print it out for her.  I’d stop by the Come Back to have a beer just because she was working.  She was always great at turning my day around if I was having a crummy day.  Yes, Jess will be missed.

I finally rolled into the Come Back at 12:30 and the place was rocking.  Sunday nights are karaoke nights and the crowd is pretty enthusiastic about its karaoke.  I took a seat on the side of the bar away from the singing (I’m more of a sinner than a singer) and gave Jess a high 5.  She was in good spirits to say the least.  Jess didn’t have to ask if I wanted a beer or what flavor, she turned around and promptly poured a Bell’s Two Hearted for me.  Ahhh, nothing like a great beer from your favorite bartender after a long day.

We talked a bit before she had to tend to other patrons and I sat there like usual, staring blankly at the TV’s showing replays of the sporting events of the day.  As I get older, I’m caring less and less about sports, they don’t seem very important anymore.  I think ESPN and its TMZing of sports has been a big factor in that (I don’t care what Tebow wore at practice today, he still sucks).  Anyways, sitting alone at the bar has made for great contemplation time.  When alone on the trail, your mind can wander and lead you in many different directions, but, living in Madison, those opportunities elude me.  I don’t have those quiet moments of reflection with work and the seductive nature of the TV at home.  The bar may not be quiet, but it somehow helps stimulate my mind (beer may have something to do with this).  When I’m working on a blog post or article for Mammoth Tales and I get stuck and waste my time not writing, I’ll go to the bar to free up my mind and the words start flowing again.

Jess came back around and offered up a shot, which I gladly accepted.  We talked off and on while I whittled away at the beer in my mug.  She’d stop over and relate a story about a fellow patron acting stupid and I’d try to pretend that I wouldn’t be that stupid.

A good bartender keeps you coming back, not just because of their drink making skills or looks, but also from the interactions with the patrons.  Anyone can serve a beer, but a well-placed smile or word can do wonders.

It was an end of an era at the Come Back.  When I first started to frequent the bar a few years back, the triumvirate of Roxanne, Andura and Jess kept the mugs full and put a smile on everyone’s face with their great service and friendly personalities.  Roxanne was the first go as she left for a “real” job, but we still had Andura and Jess to slake our thirsts.  You could head down to the Come Back at any time and chances were, one of the ladies was working.  Then Andura left for the greener pastures of the Great Dane.  And with Jess leaving, the final leg of the beautiful bartending trio is no more at the Come Back.

I finished the beer, but Jess was busy trying to get all of her duties done so she could get out of there and start drinking herself so Duly filled up my mug.   Last call was made, signaling the end of karaoke and people started making their way to the door.  I slowly finished my beer, trying to savor the last few sips.  With my beer gone, I had no choice but to leave.  I gave Jess a final hug and ambled out the door.

Nimblewill and Jess may not have a lot in common on the surface, but they both play an integral role in two of my favorite things, hiking and drinking, respectively.  Much wisdom is to be gained from walking even a single day with Nimblewill and spending enough nights getting served by Jess will make your life a little more enjoyable and wholesome.  Sure, there will be other bartenders and hikers, but Jess and Nimblewill will always hold special places in my heart.
Posted by The Cut at 10:51 PM